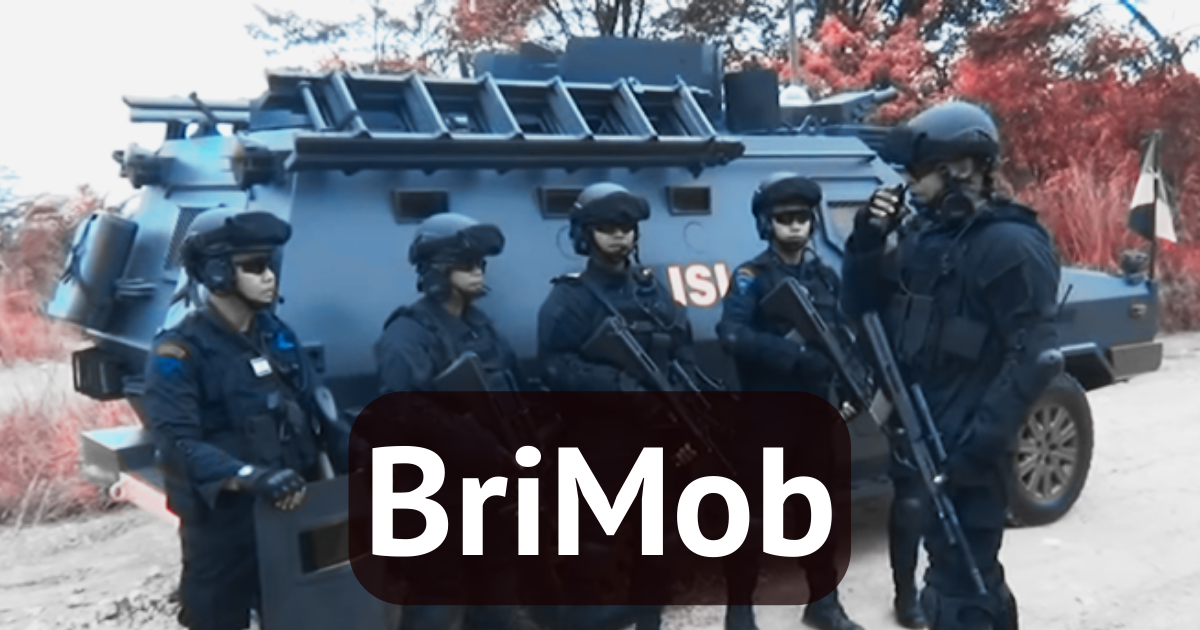 BriMob platoon on patrol in West Papua, with Kalashnikov and RPD guns from Russian

BriMob, or Mobile Brigade, is the Indonesian riot police. This force is the one most commonly deployed to 'contain' protests throughout Indonesian controlled territories, including West Papua. BriMob are frequent offenders in terms of human rights violations, from illegally dispersing peaceful demonstrations with violent force, through to shooting at and killing unarmed people engaged in public protest. BriMob has been implicated in countless extrajudicial killings across the archipelago and in occupied East Timor. In West Papua, BriMob and their heavy duty international arsenal pose a real risk of serious injury and death to people taking part in the civil resistance to Indonesian rule.

This rifle is Norinco's version of the Russian Kalashnikov, or AK 101 weapons. Thousands of the AK 2000Ps have been sold to the Indonesian Police or POLRI in the past two decades. The BriMob training manual contains advice about its use and BriMob as well as ordinary police can be seen carrying this gun in West Papua.

The Promoter is the upgrade to the Tambora, with the capacity for up to 12 passengers.

The SSG 08 is a highly accurate bolt-action sniper rifle, developed in collaboration with Austria's counter-terrorism unit. A source indicates that BRIMOB has trained with the rifle, there are unverified reports of BRIMOB members carrying the weapon in West Papua, and the weapon has been ID'ed by analysts as being carried by security forces at the Grasberg Freeport mine.

The Wolf, or DAPC-1, accommodates 8 troops. There are six firing holes inside the cabin and a gun mount in front of the roof hatch for attaching a submachine gun. The roof can be fitted with strobe lights, sirens, spotlights, and CCTV camera systems, and comes equipped with four smoke grenade launchers and two boxes each containing 16 tear gas canisters.

BriMob - Gegana Unit has been using Daeji’s Wolf APC since 2013.

Local media sources say a shipment of SAGL grenade launchers arrived in Indonesia in 2017, destined to be used by BRIMOB. Other sources indicate that the weapons came with a variety of ammunition, including tear gas, smoke, and “sharp”, which appears to consist of small metal pellets and were specifically destined for Papua and Poso.

The import of the SAGL grenade launchers caused contraversy in Indonesia after the shipment was detained at the docks. The import had bypassed the official military channels for arms imports. The seizure of the weapons made the news and highlighted the militarisation of police, an issue of concern for human rights and land rights activists across Indonesia as well as West Papua. The BriMob commander was asked to explain to national media why the police force required high-powered grenade launchers.

The Bell 412 is a utility helicopter used for law enforcement, military and civilian purposes around the world. Nine were ordered by Indonesia in 2018. One was delivered in January 2021 and two more in July 2021. The helicopters are being built in the USA before being handed to Indonesian state-owned company PT Dirgantara Indonesia (PTDI) for customisations “including a Gatling-type gun from US-based company Dillon Aero”.

The M1911 is a commonly used handgun among BriMob police. It is also produced locally by Pindad, as the Pindad P1.

BRIMOB members have been photographed carrying the Barrett MRAD (Multi-role Adaptive Design) sniper rifle here. BRIMOB snipers have shot at civilians in West Papua on several occasions, sometimes fatally. While it is not possible to tell exactly which sniper rifles were used during each attack, it is highly likely that Barrett weapons have killed people in West Papua.